Four seniors on a trip from Bastrop died in a tragic train-bus crash in Biloxi, Mississippi. As authorities uncover details for the case, families search for answers.

March 8, 2017 attorney Jason McMinn spoke with CBS Austin reporter Courtney Schoenemann. Railroad crossings can be sites of dangerous intersections when all parties do not take caution. Danger can occur when the locomotive operator fails proper safety procedures, the Union Pacific’s oversight of railroad maintenance, or a vehicle operator fails to adhere to warning signs.

Jason McMinn spoke with KEYE TV about the responsibility of parties involved in the Biloxi accident and what it could mean for Austinites. See more about the interview here.

Lockhart Remembers Beloved School Administrators
Two victims in the crash have been identified as Ken Hoffman, and Peggy Hoffman, Lockhart ISD stalwarts. Ken Hoffman retired in 1996 as an assistant superintendent of the Lockhart school district and Peggy retired in 2002 as principal of Plum Creek Elementary. Between the couple, they shared a combined 85 years of service to the school district and its’ students.

Their legacy lives on in four family members who serve in the Lockhart Independent School District. A daughter teaches at George W. Carver Early Education Center, a granddaughter is counselor to the M.L. Cisneros freshman campus; another granddaughter teaches at Plum Creek Elementary; and one grandson teaches robotics and is the softball coach at Lockhart Junior High School. 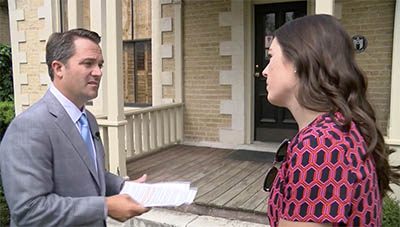 35 injured, being treated in area hospitals

Some passengers near the back of the bus were able to escape before the crash. Others were subject to the impact and sustained minor to major injuries.

The daughter of one woman, Melissa Ramirez Flores, spoke to KXAN News saying that her mother fractured her back and has sore rib from the crash. She told KXAN News she is grateful the injuries were not more severe.

The crew of the train company was not injured in the crash.

The investigator, Robert Sumwalt has announced that he will conduct the thorough investigation.

Details of the crash site may indicate some fault

Investigators of the crash arrived in Biloxi early Wednesday. According to Robert Sumwalt of NTSB an accident occurred at the intersection two months ago.

Investigators will be looking into whether or not there is anything particular at the crossing.
A casino trip from Bastrop Senior Center crashed near Lake Charles, Louisiana in 2013. Several seniors were injured in the accident.

Eyewitnesses said the bus was stuck on the railroad track for some time before it was struck by the train.
The crossing where the accident occurred, on Main Street in Biloxi, has a yellow “low ground clearance” warning sign on each side of the track. The sign shows a trailer in a tractor-trailer bottoming out on the tracks.

There is an elevation difference between the road and the track, which runs east-west through Biloxi. Drivers must drive over the tracks “at grade” on all rail-road crossings in Biloxi.

March 7, 2017 Four have been confirmed dead after a crash in Biloxi, Miss. A charter bus from Austin was struck by a freight train, in a statement from the police chief from Biloxi.

Three people were confirmed dead at the scene and a fourth passed later while receiving medical treatment.
Thirty-five people were injured in the bus, train crash. Two had to be extricated after becoming trapped in the bus. Seven were reported uninjured.

An eye witness told the Biloxi Sun Herald that the bus had been stuck at the railroad crossing for 5 to 10 minutes when the train struck the bus.

Several of the passengers were trapped under the bus because they were exiting the bus at the time of the crash.

Officials have not yet released any information indicating what may have caused the bus to become stuck on the train tracks.
Photos from the scene reveal that the bus is part of Dallas-based company Echo. According to the company’s website, they have more than 300 vehicles and operate in Arkansas, Louisiana, Oklahoma, and Wyoming.

They offer “comprehensive tour, charter, and shuttle services to a full range of corporate, municipal, and institutional users, as well as individual travelers for professional and leisure travel requirements.”

Authorities have not yet released information about the victims, or the reason for travel on the bus.

The train involved in the crash is operated by CSX Transportation. They operate freight rail lines throughout the eastern U.S.